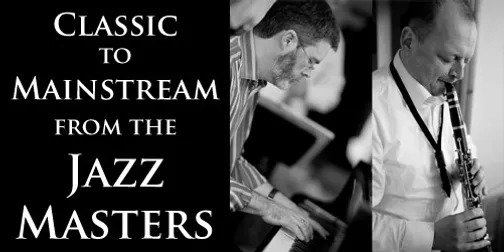 So, tell me about jazz.

Tell you about jazz?

Tunes! Yes, that’s a better word. Also, lots of people think you need a musical education to listen to jazz but you don’t. It’s accessible to everybody if you’re in the right hands.

Exactly. What made you go into it in the first place?

Acker Bilk playing Stranger on the Shore. I thought it was lovely so I bullied my dad into getting me a clarinet.

How old were you?

That’s one of my favourite pieces too. I met him once, you know. Acker Bilk.

He was wandering around backstage at the Royal Festival Hall and I thought he was his dad.

That was your opening line, was it?

I hope not. I think I asked him if he was all right. He said he was looking for his dressing room. The penny dropped and I realised that this was not Acker Bilk’s dad but Acker Bilk himself, and that this figure from my childhood might look older than he did in the 1960s but then, so do we all! It was one of those shocking moments when I realised I was old. Well, older, anyway.

Such is the modesty of Alan Barnes, Dear Reader, that he failed to mention at this point that he knew Acker Bilk well and had worked and recorded with him.

It occurred to me hours later, so I mailed and asked the question. He admitted it and sent me this anecdote.

I did a tour with Acker when I was playing with Humphrey Lyttelton, in a package that included his own band, Kenny Ball’s band and the Humph band. He was a lovely bloke who told me about an act he’d seen in Australia called ‘Col E. Flower and his Musical Fruit and Veg’.

The act had a Courgette Marimba, a Cauliflower Conch and a Carrot Clarinet. The Humph band were very taken with this and we bought a huge carrot at a Yorkshire farm, hollowed it out and put finger holes in it, finally adding a clarinet mouthpiece.

On Acker’s birthday I played ‘Stranger on the Shore’ to him on it.

I started to duet with Humph on this instrument on a number called ‘Tin Roof Blues’, which became a successful part of the show.

Humph wanted to record it a few months later so I froze the clarinet for the purpose; but on defrosting we found it had gone soft and mushy. So that was the end of that. The duet with Humph was reported in the Sun newspaper under the heading ‘Beat and Two Veg.’

Alan promises to play ‘Stranger on the Shore’ at his concert in Hay on 14th April. Here is his recording of it with Martin Taylor from their album ‘Two for the Road’, by Woodville Records. Available to buy from his website.

I like all of it really. Virtually the whole history of jazz. I like some of the early things and loads of the mainstream players, and I like the Bebop players as well.

Buddy Tate, Lester Young, Coleman Hawkins. My favourite singer from that period was Billie Holiday. I love the small-band things she did, which have become more important to me as I’ve got older. I used to think they were just great, but now I think they’re – well – profound, really. I love them.

I agree. And what do you think makes her such a great singer?

The phrasing. The way of putting a song across. Each song means something; it’s not just somebody singing a song at a dinner dance, is it? She seems to get to the emotional centre of the music, but she also somehow phrases it in such a jazz way, it is jazz. Whatever she does is jazz.

I heard a theory once that she was forced to improvise because she had such a small vocal range that she couldn’t sing the tune.

I don’t go along with that, though I think you’re probably right about the restriction in range. Similarly, when Chet Baker sang or played the trumpet he stayed around the middle-range of notes, but both he and Billie didn’t need any more range. They just worked with what they had. That’s the essence of it. It’s doing what you can with what you’ve got.

And what do you think you’ve got?

What have I got? Well – I’m fairly jolly and people quite like to see me turn up and – I don’t know – I’ve got a way of playing a tune, I guess.

Very true. And turning now to the subject of you being jolly – you’ve got a funny-looking face, haven’t you, really?

A funny face, or an interesting face?

Interesting. Funny. I mean, I think a good face is very important.

[Is he talking about me?]

I mean, you’ve got to have your own view of life and things and be able to speak to it and put it across; so that when you stand next to another saxophone player or singer – or any instrument – and they go a certain way, you don’t have to go that way. You can stay where you are and just be yourself, because if you start trying to play better than the person next to you at what they do, you’re going to lose.

What’s your philosophy of life?

Just to keep going really. For as long as possible. Trying not to be dismissive of new ideas. To try and be part of the group of people rather than to be an individual soloist.

But, that must be hard for you. You’ve won 25 awards; you must be aware of your ability?

I don’t ever see music as a competition at all. To call somebody the best is a kind of madness. I get slightly embarrassed by awards. You can’t compare. That’s the whole point of the individuality of all the different soloists. You can say who you prefer, or who makes for a more enjoyable evening to go and see, but it’s not about who’s better.

You don’t have to be the best; you’ve just got to be yourself.

That’s just my way of getting music across to people who wouldn’t normally listen to it. And if you tell them something about it; if you tell them what’s happening, they understand. I try and tell people what’s happening and why. I’ve been in jazz gigs all my life; I listen to the other players in the band and if they tell you about all these wonderful musicians it’s fascinating. That’s what I want to experience, so that’s what I try and give my audience.

Excellent! Well, thank you very much! I think I’ve got enough here to make a complete monkey out of you.

He is very funny, though, ladies and gentlemen and famous for his sharp wit. For instance, we were waiting to go on stage at a jazz festival and I arrived at the last minute, done up as much like a dog’s dinner as I could possibly muster; twinkling, sparkling and glammed-up to the ‘nth degree. I joined the group, graciously accepting gasps of admiration from those musicians who’d been properly trained by their wives. Alan took one look at me and said, ‘Come on Janice! Get your gear on, we’re on in three minutes!’ 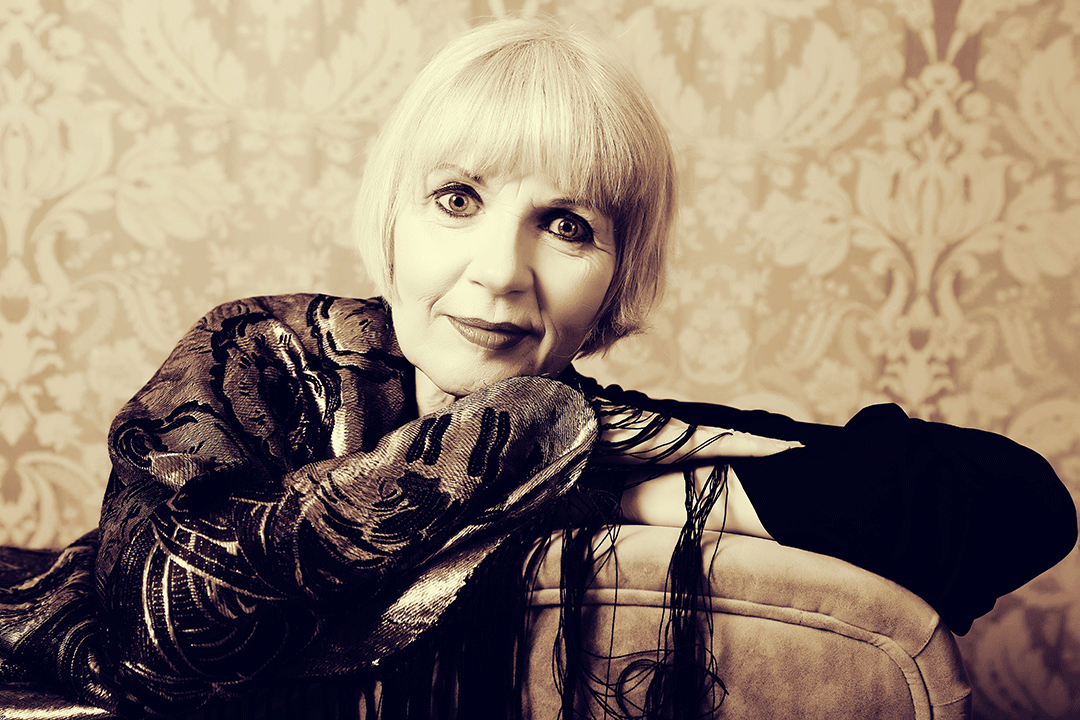 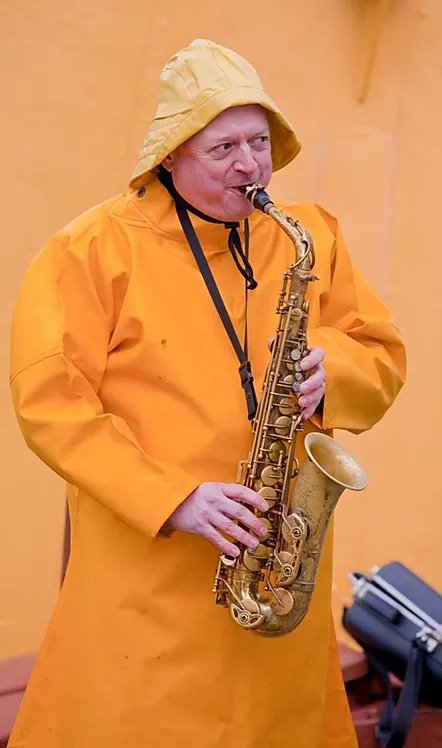 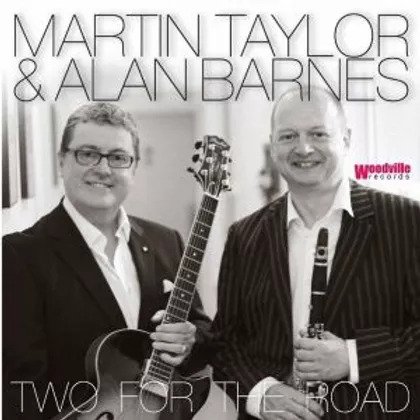 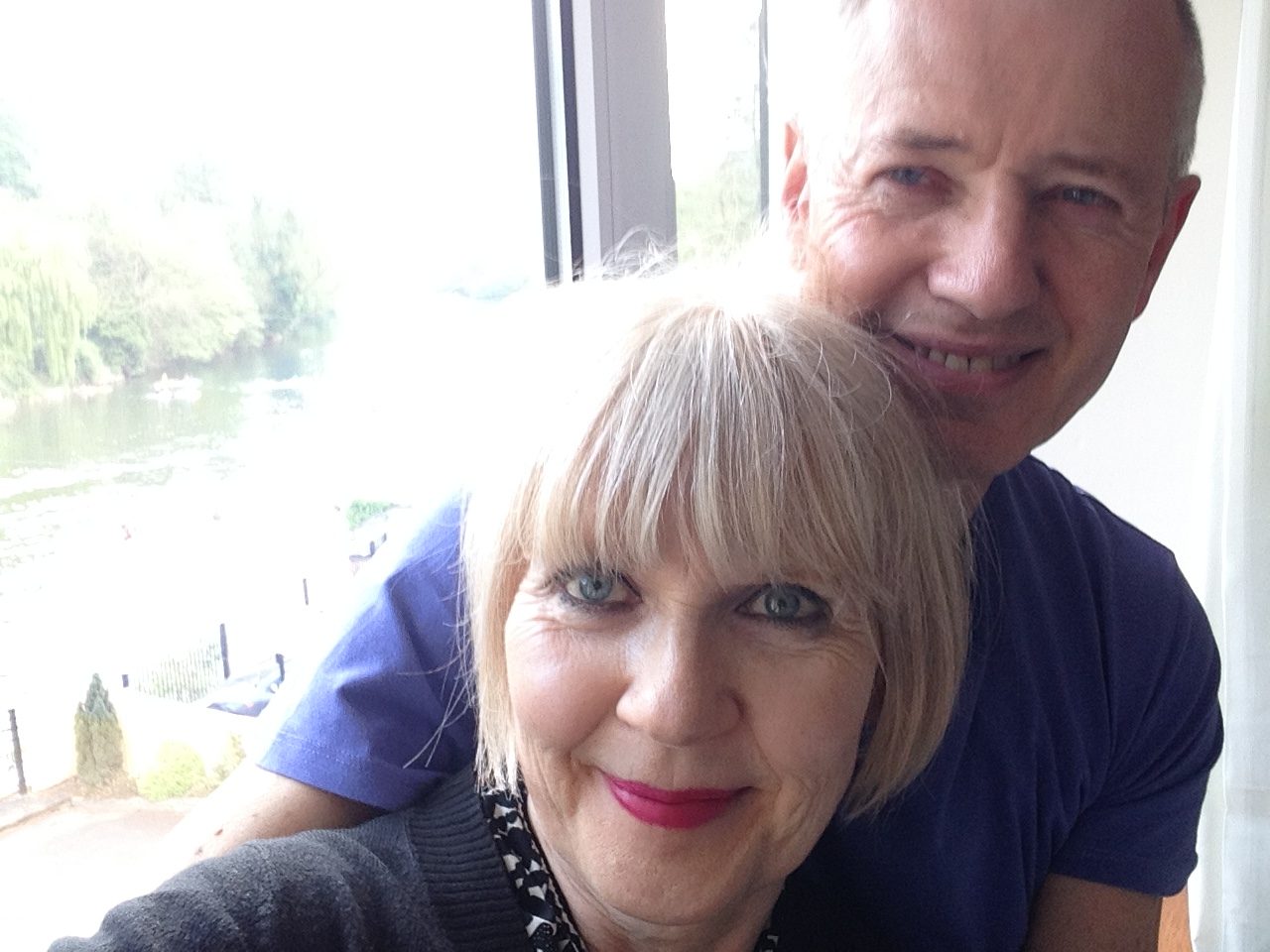